Poetry: What is it?


Poetry must be as well written as prose
– Ezra Pound

Nothing you couldn’t, in the stress of some emotion, actually say
– Ezra Pound

No ideas but in things
– William Carlos Williams


These three mantras go a long way towards summarising the Modernist approach to poetry. It's certainly not the only approach, but it's not a bad starting point.

Pound and Williams were in profound reaction against what they saw as the wordy, inexact poetry of the late nineteenth century. They wanted poetry to achieve the same precision and profundity as the novels and stories of Conrad, Flaubert and Tolstoy.

These rules were intended to help new groups of poets such as the Imagists or the Objectivists adopt a far more rigorous and scientific attitude towards the problem of charging language with as much richness and significance as it was possible for it to hold.

As far as this course is concerned, a poem is an intensely condensed piece of language, every element of which must be thought through and meaningful. Some of the building blocks we will be looking at over the next few weeks are:


If you feel a bit intimidated to begin with at the idea of writing a poem from scratch, that's not unusual. There are a number of exercises and suggestions in the course materials to get you started. Once you get going, though, I'm sure that you'll find it a lot less difficult than you feared. 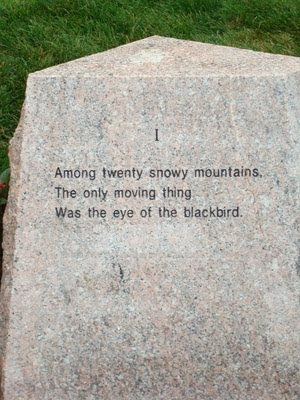